Signed and inscribed in pen and brown ink on the verso A.S.ft, pencil, watercolour and gum arabic, heightened with white, pen and black ink framing lines, on laid paper

Condition: Minor foxing and time staining throughout, otherwise the watercolour is very fresh and the paper in an excellent condition, it is hinged with conservation tape in the upper margins onto a conservation, and not laid down

Aert Schouman is regarded today, as well as in his day, as one of the unrivalled watercolourists of the period. Around the age of 15 he began an 8 year apprenticeship with Adriaan van der Burg in his native Dordrecht. After his masters death Schouman became an in dependent artist, earning his living chiefly as a painter of portraits and wall hangings, although he accepted more modest commissions. Like many of his colleagues Schouman also worked as an art dealer. Beginning in 1735 he received commissions from the province of Zeeland, and in particular from the town of Zeeland, where his brother Cornelis was active as painter. From around 1748 he lived alternatively in Dordrecht and The Hague. It was in The Hague, where the stadtholder had his court, that Schouman came into his own as an artist. Niemeijer regarded Schoumans, rendering of animals and birds, some in oils, but most in watercolour, are probably his most important contribution to eighteenth-century Dutch art. In them he combined an exceptionally radiant palette with a rapid, transparent handling of the brush and an assured mise en page. 1

The present watercolour is comparable to many pictures by the artist of birds, including these three which have been published Condor, the king of the Kites; Pair of ducks at the waterside and Crowned Pigeon.2
These following watercolours of birds are also very comparable to our drawing and were in The Unicorno Collection and sold in 2004, A Crested Oropendula and An Adult and a Juvenile Night Heron.3
Another closely comparable watercolour is of Two Doves on a Branch from the Ploos van Amstel Knoef collection in the Museum Boijmans Van Beuningen. According to van Dam Schouman made these types of drawings the drawings background; he painted it from his imagination with a brush. The background generally depicted the area from which the bird came. Schouman was able to sell many of his studies because there was a huge market from them among both collectors of drawings and collectors of unusual flora and fauna. As far as the artist himself was concerned, however, they would have essentially remained studies that he could use in larger compositions or his wall coverings. 4
Additionally Laurens Bol has written Schoumans watercolour depictions of birds can be divided into two groups, according to the nature and requirements of the subject. First, there are the portraits, some of a single bird, others of two or three grouped together sitting on the branches of a sketchily drawn, moss-covered tree or trunk. This aptly describes our drawing. 5
Major The Hon. Henry Rogers Broughton was a significant benefactor to the Fitzwilliam Museum, Cambridge, and there is a gallery (Gallery 17, which is dedicated to flower paintings) which includes works all from his collection. In the prints and drawings department at the same museum this work by Aert Schouman (PD.127-1973).
Henry was born in America and educated at St. Pauls School, in the USA, before going to Harrow and being commissioned at Sandhurst and Royal Horse Guards in 1920. Five years later he and his brother bought the Barton Stud near Bury St. Edmunds, and the following year Anglesey Abbey.

Other Artworks By Aert Schouman 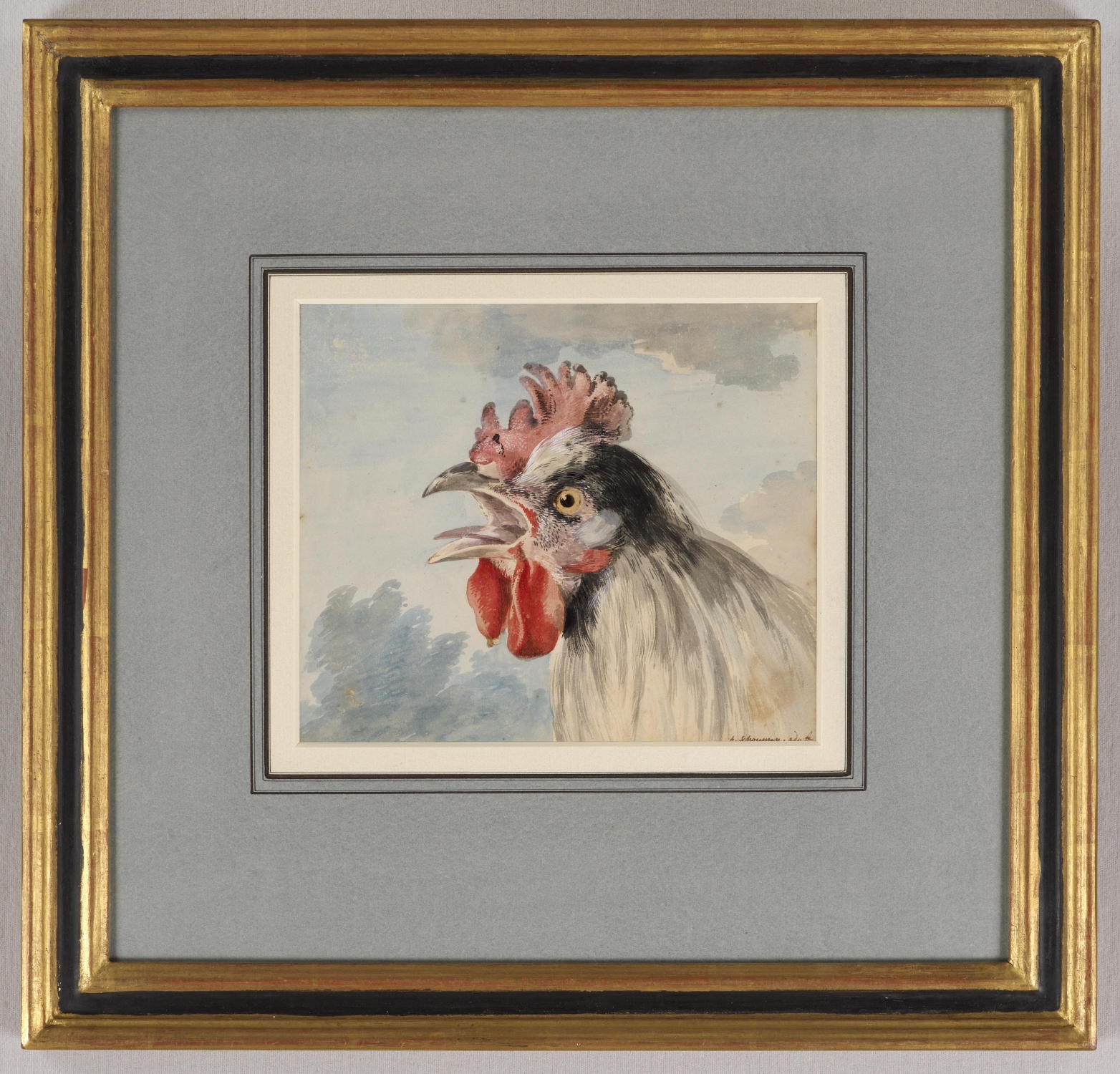 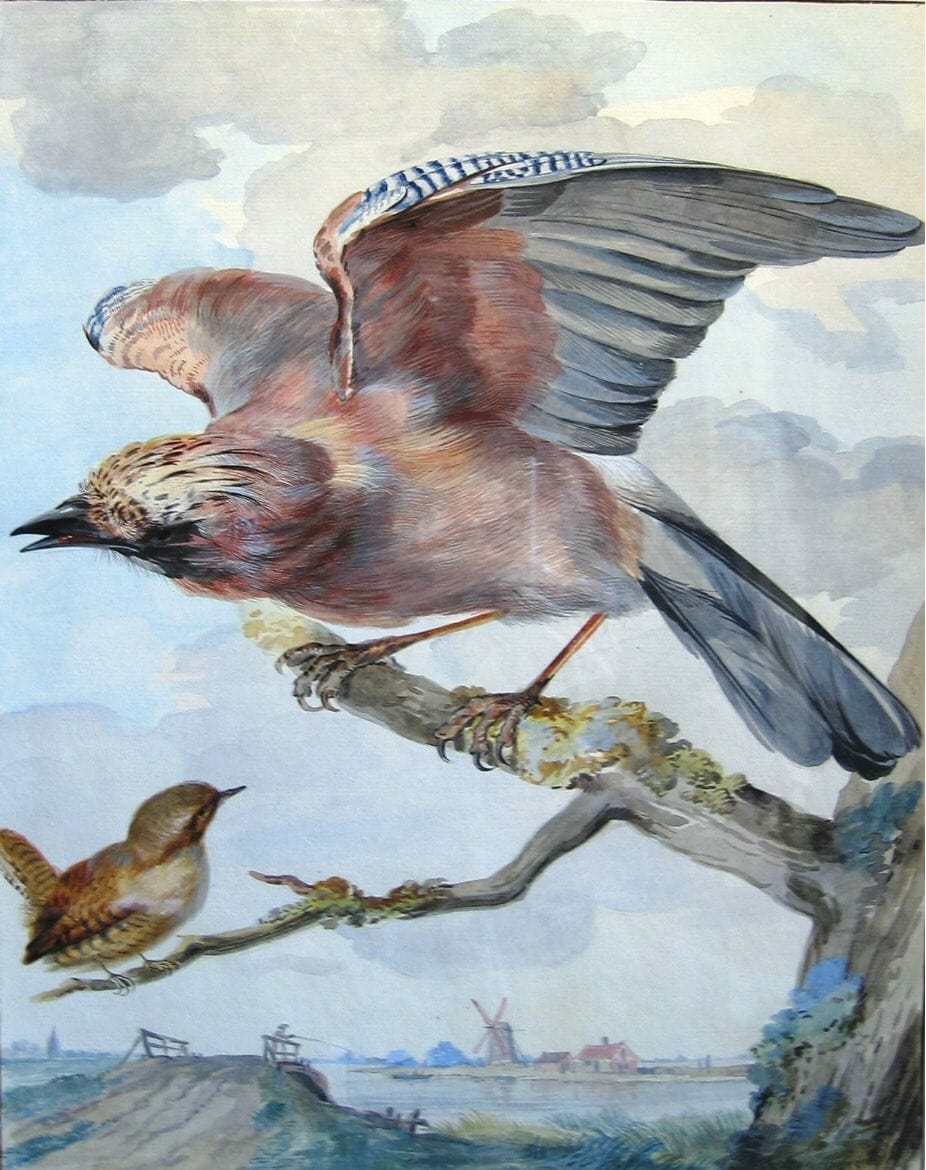 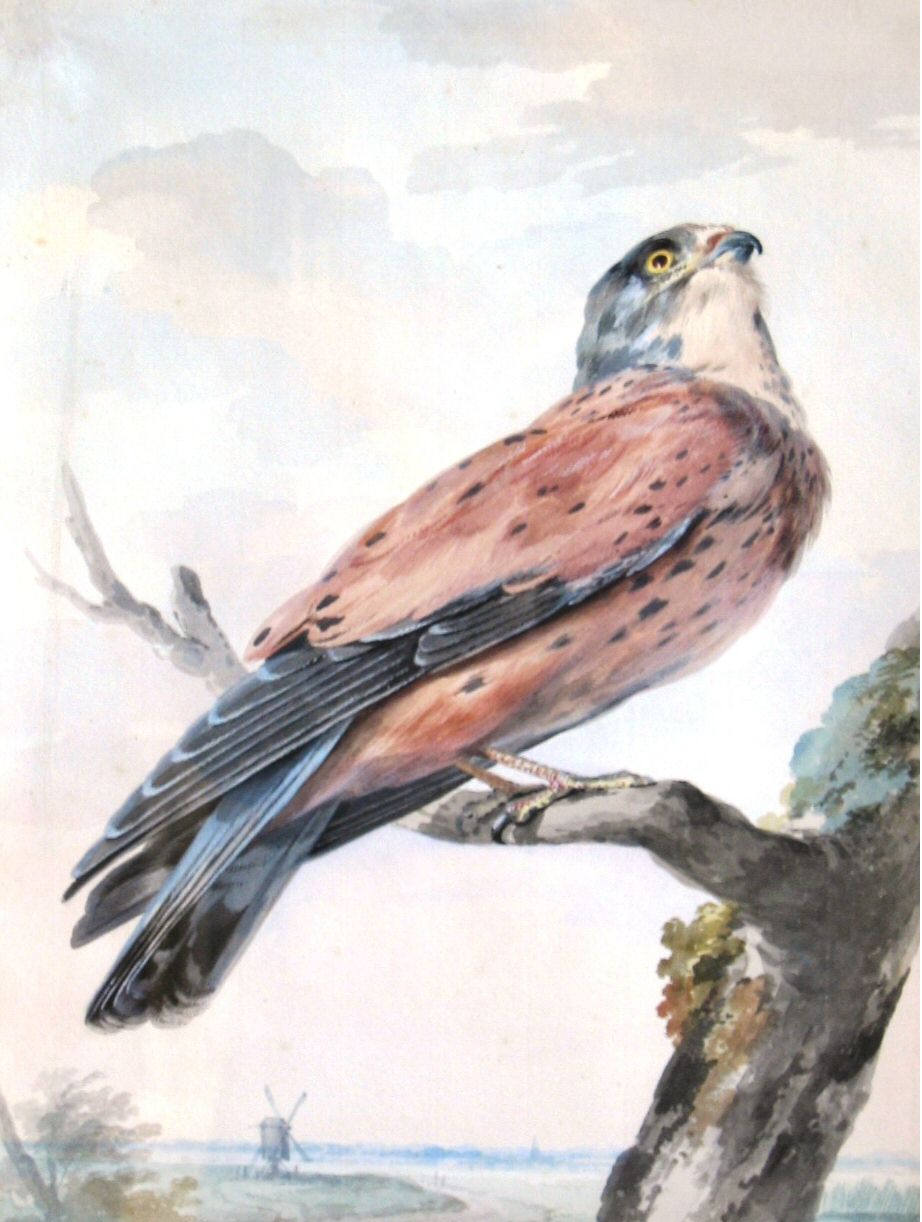 Aert Schouman
A Kestrel perching on a branch, a windmill beyond
SOLD 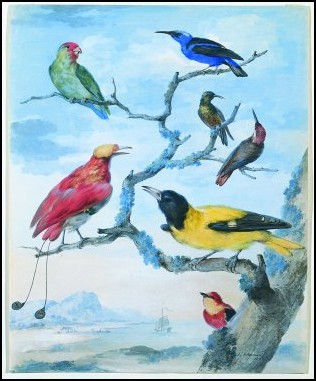 Aert Schouman
A Red Legged Honeycreeper, a Parrot, two Hermit Hummingbirds, a King Bird of Paradise, a Black Hooded Oriole and a Corociiform, on a branch in an imaginary Landscape
SOLD 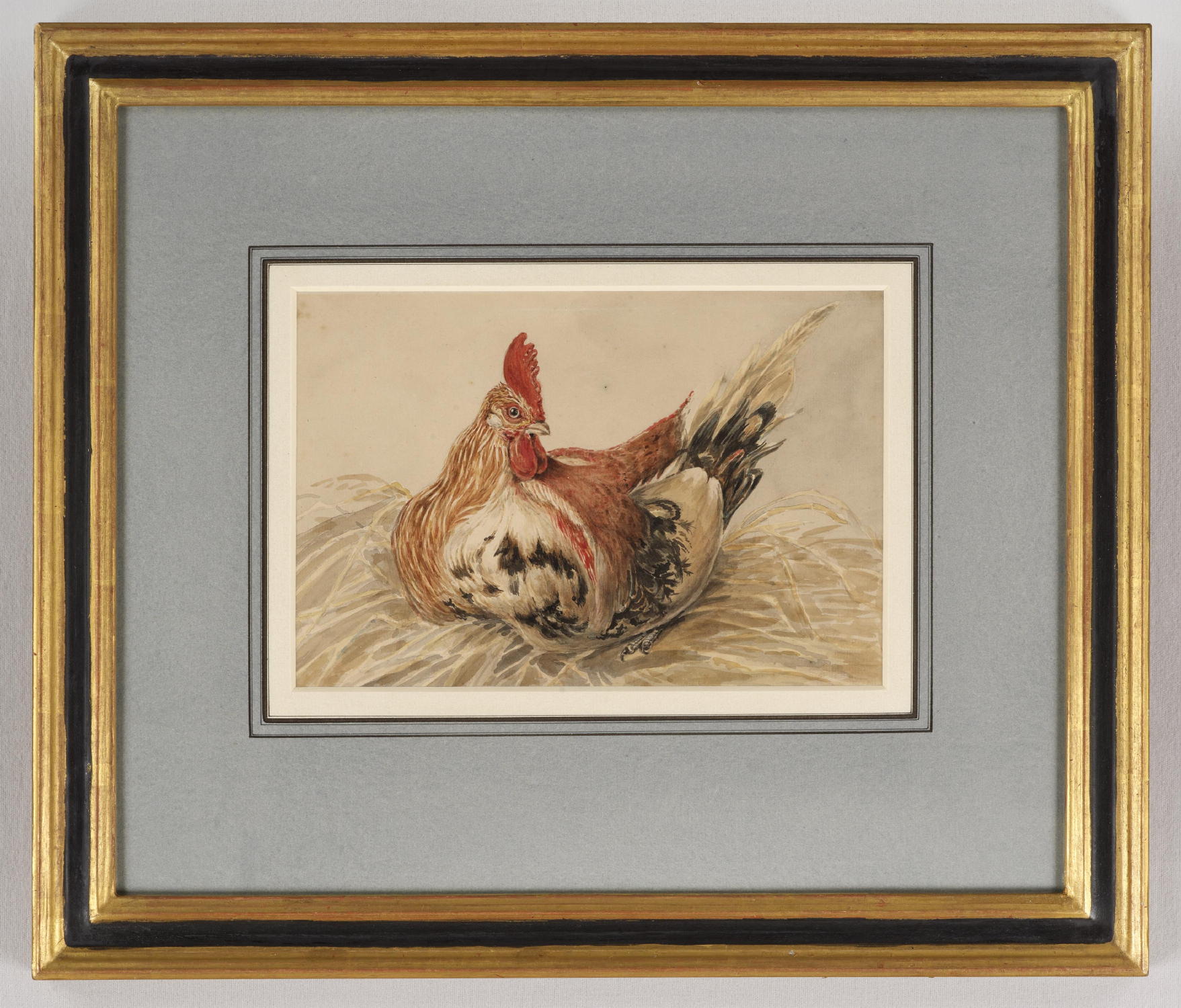 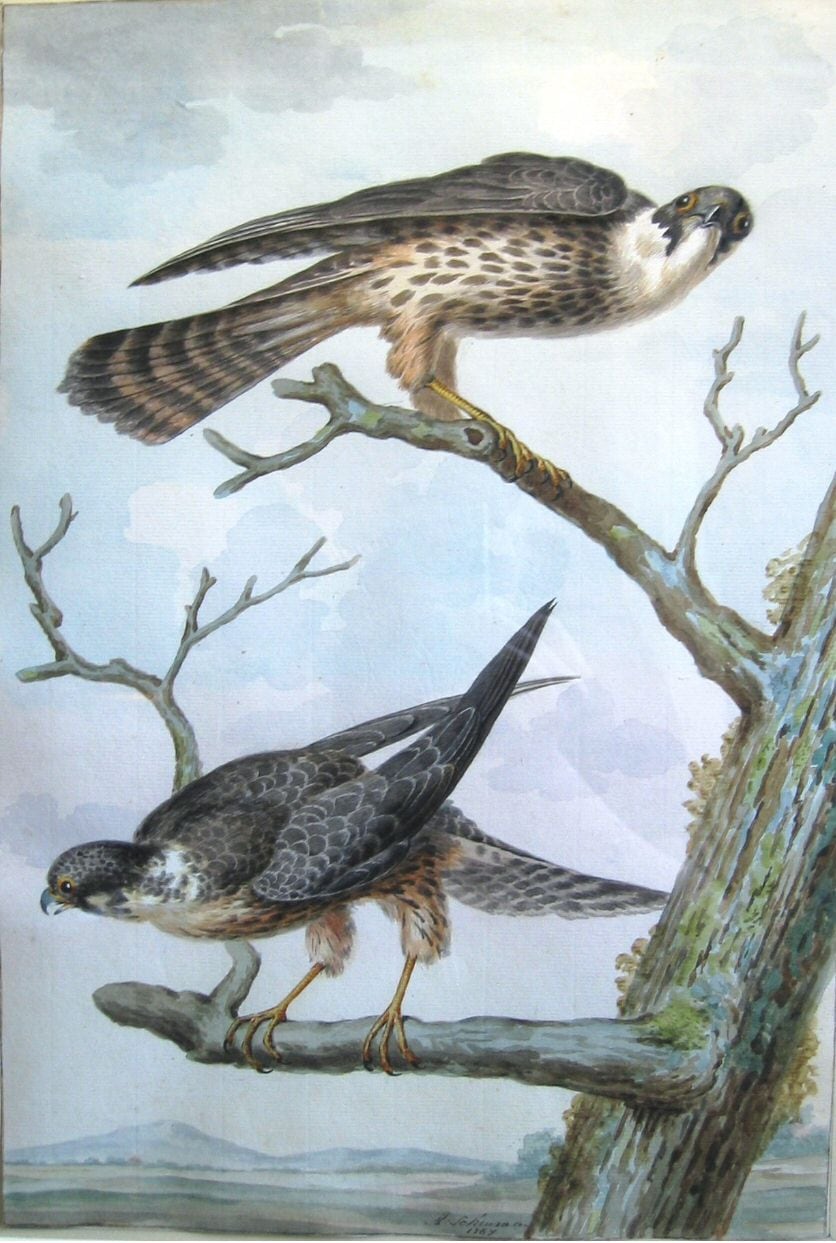 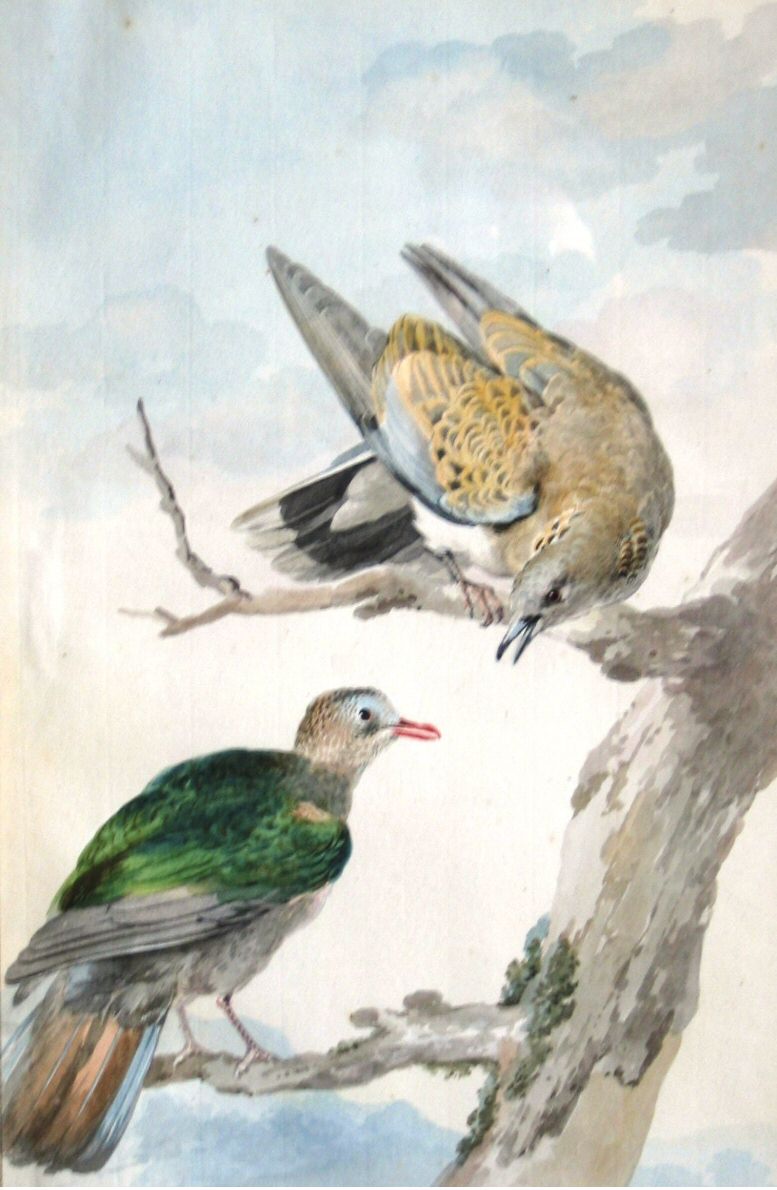