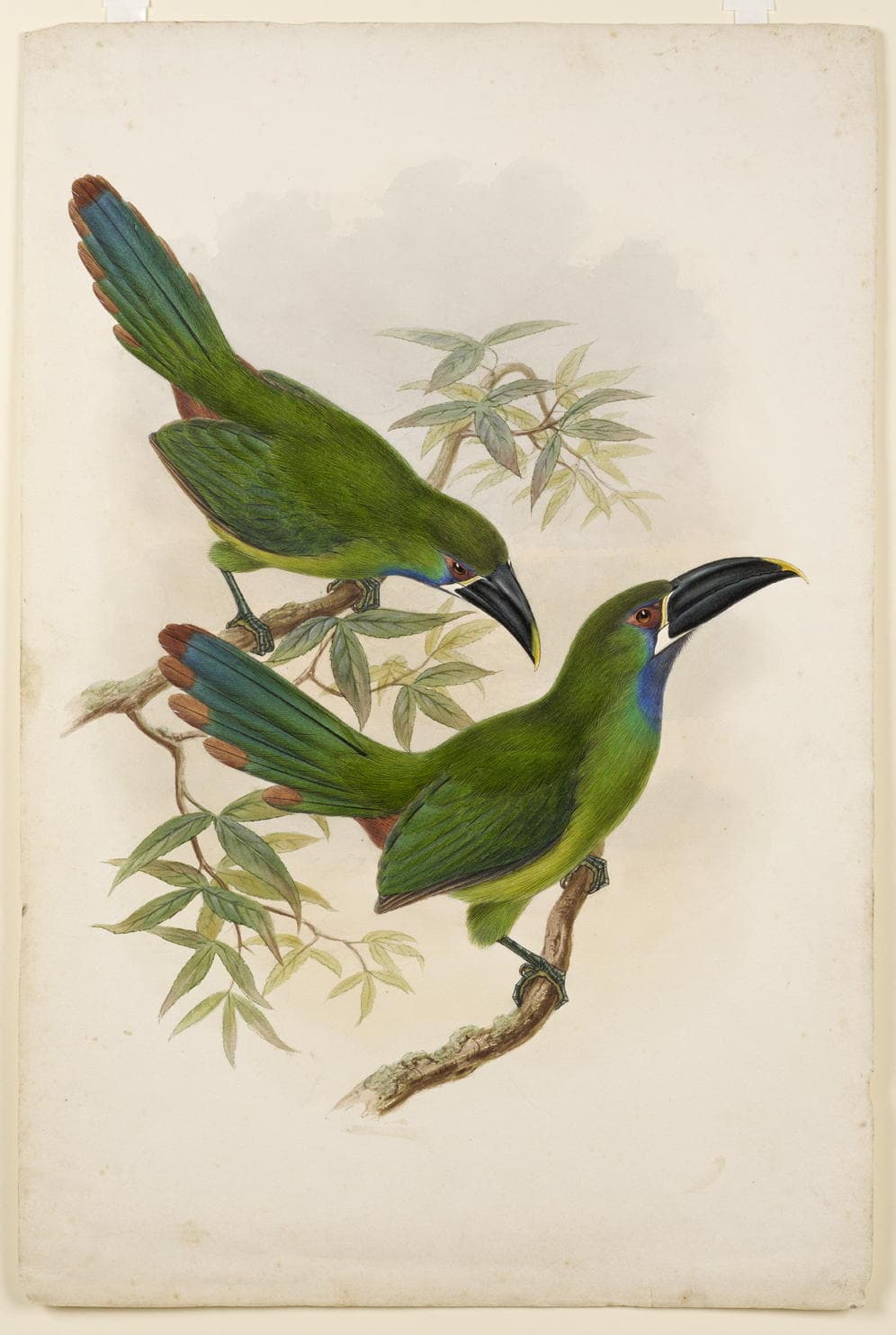 Hart drew and lithographed 2,000 bird plates during his lifetime, the majority of which were for Gould for whom he began working in 1851. Despite the length of his service Hart does not seem to have been credited with delineating the birds until working for R.B. Sharpe on Goulds Supplement after his death. Hart generally signed W. Hart for transference onto the lithographic stones and his work was printed with the acknowledgement J. Gould & W. Hart del. et lith. Further biographical information is quoted from the Introduction of Piccadilly Notes: ‘There is sometimes a mistaken idea that Gould himself made the actual drawings for his various books on Birds- this is not correct- he was a great Naturalist, and a keen observer, with an extraordinary faculty for seizing on, and quickly recording in a rough sketch, the characteristics of any bird that he saw, it was from these rough sketches- a large number of which still exist- that his wife and at a later date Edward Lear, H.C.Richter, and William Hart, made the beautiful finished drawings, which were afterwards redrawn on stone- in the early years by Mrs Gould herself-afterwards by Mr Richter, and onwards from 1851 by Mr Hart.’ 1

The attribution of our drawing has been confirmed by Maureen Lambourne, on first hand inspection of our picture, who writes,

‘Your watercolour is very characteristic of William Hart’s strong draughtsmanship, bold colouring and formal positioning of the birds. As you suggest it was probably bought at Sotheran’s sale of Gould watercolours in the 1930s. It is a careful study of toucans for Gould but was never illustrated in his publications.

Hart worked for John Gould, first as a colourist in 1851, and later as an artist and lithographer. Gould published the ‘Monograph of the Toucans’ 2nd edition in 1852-4, illustrated by H.C.Richter, but this watercolour is probably of a later date when Hart was an accomplished artist. It may have been a record of a new species of toucan and Gould kept it in stock for possible future illustration in his books.

In the Victoria and Albert Museum Prints and Drawings Department (E.3786-1953) is a watercolour by Hart of the Crimson-Rumped Toucanet (Aulacorhynchus Haematopygus). The position of the upper Toucan is very similar to yours. I enclose a copy of this watercolour, it is illustrated in Goulds Exotic Birds published by Webb & Bower 1987. 2

The group of watercolour by Hart at the Victoria and Albert Museum are closely comparable to our drawing both stylistically and in the size of the paper, and in the mis-en-page of the birds. Particularly close is the watercolour of Toucans of the genus of Pteroglossus, which is possibly a drawing for a rejected plate for the second edition of John Goulds A Monograph of the Ramphastidae, or family of Toucans, London, 1852-4, drawn in pencil, pen and ink and watercolour, the sheet size is 438 x 330 mm. 3

The identification of the birds as an Emerald Toucanet from South Ecudaor and North Peru has been made by Hein van Grouw. In the collection at the Natural History Museum in London there is a male and female of this subspecies from the collection of John Gould, which were given to the museum in 1881, and it is likely that these were the ones that Hart used to base our picture on.4

It is interesting to read the description of these birds published in Proceedings of the Scientific Meetings of the Zoological Society of London, 1866, no. 3.

Description of a New Species of Toucan belonging to the Genus Aulacoramphus Cyanolaemus . By John Gould, F.R.S

Male, Bill black, with a small mark of yellow at the tip of the upper mandible, and a band of white at the base of both mandibles except on the culmen; this white band is much narrower on the upper than on the lower mandible, and moreover has the posterior half of its breadth pale yellow; naked skin around the eyes dull red; throat greyish blue, approaching to violet, and becoming of a deeper tint where it joins the green of the neck; a tinge of blue also appears at the base of the ear-covets, towards the bill, and over the eye, where, however, it becomes of a greener hue; plumage of the head and body deep grass-green, with a wash of yellow on the flanks; primaries black, edged with brown; under surfaces of the wing pale yellow; tail feathers deep green, conspicuously tipped with chestnut; under tail-covets chestnut brown; legs green. Total length of male 12 inches, bill 2 ?, wing , tail 5 tarsi 1

Female. Precisely similar in colour, but, as is the case with all the other species of the genus, much smaller than the male.

According to Christine Jackson in her article on W Hart, R B Sharpe stated that Mr Hart commenced working for Mr Gould in the summer of 1851, making the patterns for the Humming-birds and colouring the metallic parts of the birds. Harts last published work was issued in R B Sharpes Monograph of the Paradiseidae completed in 1898. Between those two dates Hart either coloured, drew or lithographed more than two thousand plates for different authors of bird books.

The biography of Hart was very brief until the article by Christine Jackson was published. According to family history and memories Hart was an authoritarian Victorian father, who had a large family. As a young man Hart was interested in medicine and obstetrics. His studios contained preserved medical and natural history specimens. There is no record of any formal training in art or lithography and his career with John Gould began with the task of colouring plates. During field trips in Surrey, Hart collected natural history specimens, particularly moths and butterflies. He also shared Goulds interest in fishing. Gould owned a painting of large trout that he had caught in the Thames and hung in his house over the sideboard, Gould was very proud of it and pointed it out to visitors saying that Hart painted it.

Hart was born in Limerick in Ireland, and married Harriet Firminger in 1855. 5