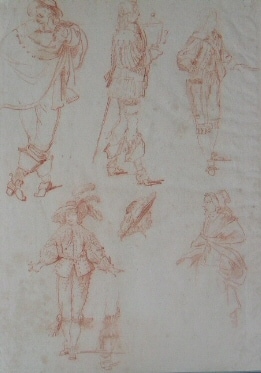 Only recently has information on this important early French artist come to light. Painter, draughtsman, and printmaker, Saint-Igny was apprenticed in Rouen in 1614, where he petitioned to establish a confraternity to Saint Luke in 1631 and was declared master in 1635. By 1629, however he was already established in Paris where he worked for much of his life. Saint-Ignys work encompassed a variety of genres-religious, historical, mythological, and allegorical, and he is now acknowledged to be one of the most important early French engravers and printmakers.

His drawings in red chalk are extremely rare and are executed in a free, loose and animated style. Two of the figures on this sheet are related to two paintings by or after Abraham Bosse (1602-1676), a contemporary and friend of Saint-Igny, and an artist with whom he is known to have collaborated. The figure of a Page Holding a Cup is related to a figure in Bosses painting of the Feast Given by Louis XIII to the New Members of the Order of Saint Esprit, Given at the Chateau of Fontainebleau, May 14, 1633 1, and the figure of a cavalier with a plumed hat seen from the rear can be seen in Bosses painting of The Five Senses c.1635 in the Musee des Beaux-Arts, Tours 2.

Saint-Ignys ability to capture the spirit of the Age of the Three Musketeers creates a window into a distant time and makes it vibrant and resonant to us today.

It is likely that the artist who drew this sheet was familiar with the graphic style of Saint-Igny.