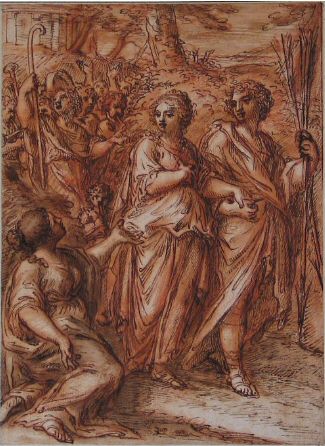 The attribution to Mariano Patrizi was first suggested by Stella Rudolph1, and has been accepted by Dieter Graf2. Numerous attributions have been suggested for this drawing which are in turn part of a homogeneous group of thirteen other drawings that are known in other locations. The attributions have been to Giuseppe Passeri, Giovanni Francesco Romanelli, Giuseppe Bartolomeo Chiari, Giacinto Gimignani, Francesco Fernandi called Imperiali, Salvi Castelucci, Giovanni Battista Lenardi and Giuseppe Ghezzi. It seems clear that this group is coming from the circle of Giuseppe Passeri, and the attribution to Patrizi, whilst not definitive, seems to be the most plausible. However only one signed drawing by Patrizi is known. This was in the concorso of 1706, where he was given the title of accedemico donore3. It is likely that the Patrizi brothers, Mariano and Francesco Felice were taught by Giuseppe Passeri. There was a close connection between the Patrizi family and Passeri, the latter painted frescoes on the Patrizi family palace near San Luigi dei Francesi, and those at their country house at Castel Giuliano.

The first two drawings, and closely connected with the present one, were on the art market4 recently, and also represent scenes from Guarinis Il Pastor Fido. They are larger in scale however they are in the same medium and technique. A third drawing of Diana and Actaeon, is in the collection of the Museum Comanderie van Sint Jan in Nijmegen5, and is drawn in a very similar technique to ours. The fourth drawing is The Death of Meleager was on the New York art market in 19876. The fifth drawing, A Scene from Roman History, recently sold at auction in London7. The sixth and seventh drawings, both unattributed, are in The Metropolitan Museum of Art in New York, one depicting Christ Succoured by Angels and the other Saint Francis de Sales8. The eighth and ninth drawings are from the story of Tobias, and are in the collection of the Hessisches Landesmuseum in Darmstadt9.The tenth drawing, of Christ Preaching to the Apostles appeared on the art market in London in 199110. The eleventh drawing is in Palermo and is in a similar technique to our drawing as well as the others11. The twelfth and thirteenth drawings were part of the same group as the present drawing [see Figure 1 and 2]12. The subject of our drawing, identified by Dr Paul Taylor and Dr Rembrandt Duits, is taken from Giovanni Battista Guarinis (Ferrara 1537-1612) Il Pastor Fido. The Pastor Fido, first published in 1590, is a pastoral drama. The scene is set in Arcadia, where Guarini supposes it to have been the custom to sacrifice a maiden yearly to Diana. But an oracle has declared that when two scions of a divine lineage are united in marriage, and a faithful shepherd has atoned for the ancient error of a faithless woman, this inhuman rite shall cease. The plot turns upon the unexpected fulfilment of this prophecy. This drama held a prominent position in this history of literature from 16th century until the Revolution. This scene shows the wedding of Dorinda and Silvio. Dorinda has survived the wounding by Silvios arrow [see Figure 2] and they marry after the betrothal of Silvio and Amarillis has been nullified by the discovery that the shepherd Mirtillo is his brother, and can marry her instead.

4.Jean-Luc Baroni, An exhibition of Master Drawings and Oil sketches, New York, 2006, numbers 20 & 21. These drawings are much larger than ours, and measure 282 x 429 mm and 275 x 424 mm. Stephen Ongpin provided me with the information on these two as well as the others mentioned in this entry. Dr. Ursula Fischer Pace, does not accept an attribution to Romanelli for the Baroni drawings, however she has pointed out that they are almost certainly later in date, noting in them the particularly Marattesque figure types and Neoclassical technique. She further suggests that the artist may perhaps be found in the circle of the Roman painter Giuseppe Bartolomeo Chiari, or possibly Francesco Fernandi, called Imperiali [written correspondence, 18 October 1994].

9.Inv. AE 1772 and AE 1773 (as Romanelli). Both drawings were tentatively attributed to Giacinto Gimignani by Philip Pouncey in 1973.

Other Artworks By Attributed to Marquis Mariano Patrizi