SOLD TO A PRIVATE COLLECTOR. 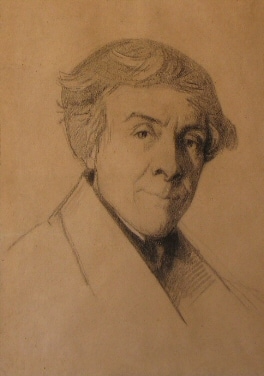 Our striking and impressive drawing by one of Frances leading 19th Century artists, is a study of the author and lecturer Jules Michelet. The painting, for which this is a study, is in the Muse Carnavalet, Paris.1 Recently Ottinger has identified that the painting, and consequently the drawing for it, were executed around 1842, and she makes a reference to an entry in Michelets Journal. Our drawing was also drawn at the same time as the portrait of Madame Poullain-Dumesnil, as is identified in the old inscription on the backing board. Ottinger does not know of the circumstances of how Couture and Michelet met however Coutures painting of Enrolment of the Volunteers of 1792 at Beauvais had been inspired by a series of lectures given by Michelet at the Collge de France. Our drawing is stylistically completely characteristic of Couture and comparable to a number of drawings that have recently been on the market, and in exhibitions2.

Couture was a student of Antoine-Jean Gros and Paul Delaroche, where he showed a great skill at drawing and was expected to win the Prix de Rome. He tried six times between 1834 and 1839 but only achieved second place in 1837. He was disgusted with the politics of the academic system and decided to take an independent path. His early paintings achieved great critical acclaim, and was proclaimed the leader of a new school. In 1847 his Romans of the Decadence was the triumph of the Salon and is his best known painting. Couture maintained close ties with the various governments of Napoleon III, and Couture received a number of major commissions including one in the Chapel of the Virgin, St Eustache, Paris. In 1847 Couture opened an atelier in Paris which was independent of both classical and Romantic schools. Coutures pupils included Edouard Manet, Pierre Puvis de Chavannes and Anselm Feuerbach and a number of American artists such as John La Farge, William Morris Hunt and Eastman Johnson. In 1859 he returned to Senlis and worked for the remainder of his life for American patrons.

1.Senlis, Muses de Senlis, B. Ottinger, Thomas Couture, 1815-1879: portraits dune poque, no.7, p.24. There is another known portrait of Michelet at Cornell University and another in the Senlis exhibition, op.cit., no. 8.

2.The following two drawings were sold from the Estate of David M. Daniels and Stevan Beck Baloga, Sothebys New York, 29 October 2002, lot 44 Portrait of a Man and lot 43 Portrait of Monginot; and Ottinger, op.cit., no. 17.