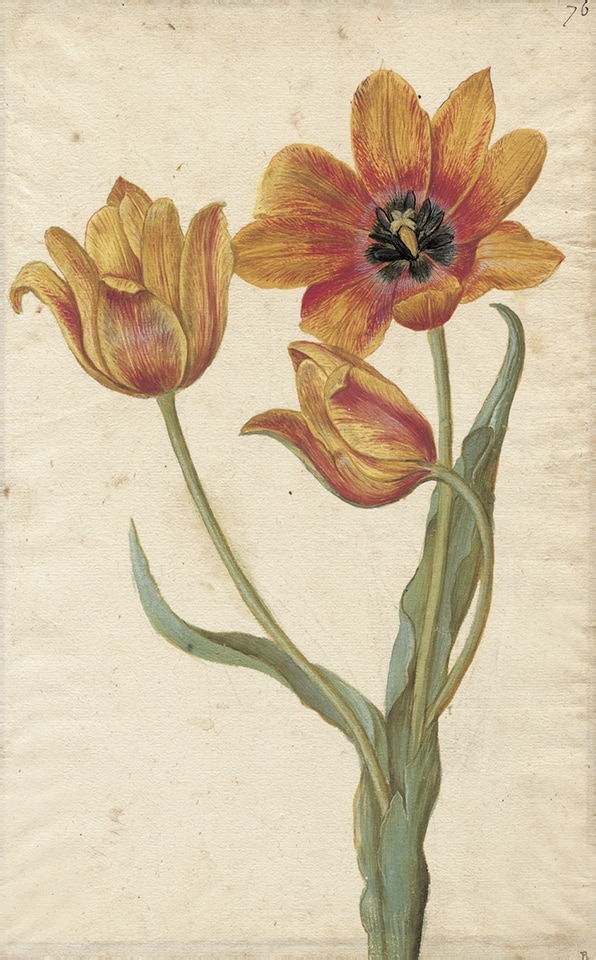 Black chalk and watercolour, numbered ’76’ upper right in pen and ink and with the initial ‘R’ lower right corner

The tulip does not need a great deal of introduction, but it is a bulbous plant in genus of Tulipa, which compromises 109 species. The Tulip Sylvestrus is a Southern European species. The species was brought into Germany in Roman times. In the third quarter of the 16th century tulips became gradually known in the Netherlands. People heard them being mentioned, possibly even saw illustrations of the flower and did not know the plant itself. From 1570 on the number of known varieties of tulips shows a marked increase. Early, mid-early and late blooming tulips are described in many colours and forms: red, yellow, white. The Dutchman Emanuel Sweerts was one of the first to put flower bulbs up for sale, at the annual fair in Frankfurt-am-Main and later also in Amsterdam. His book Florilegium was printed in 1612 and can be considered as a finely illustrated trading catalogue of plants and prints. His book offers all kinds of bulbs and also all kinds of exotic plant species from the far-off trading posts of the Dutch East and West India Companies, especially bulb plants from the Cape of Good Hope. The illustrated tulips here are also striped or flamed. This book of Sweerts went through many editions and was reprinted as late as 1654. Meanwhile the number of tulip varieties depicted in the several editions rose profoundly. The fast development of the range of tulips varieties is reflected in the tulip books produced in the Netherlands from about 1634. Prospective clients, country estate owners, could decide what to buy from the watercolours, often the work of well-known artists. This kind of buying must have been something like window shopping, for the prices fetched by bulbs in the 1630’s were exceedingly high. It explains why so much money could be invested in the tulip books. Broken tulips with a flamed pattern were all the rage, these wonderfully striped tulips are the result of an infection, the extent to which a bulb would be infected could not be predicted at that time and it remained a complete surprise how the flower could be broken. This was a major part in the attraction. But now it is known that broken tulips after some years are ill and no longer have a fine pattern. In the entire world, 43 tulip books are known to have existed, of these books, 34 were made in the Netherlands during the first half of the seventeenth century. The most famous are two books by the painter Jacob Marrel. The Rijksmuseum Amsterdam has one of his tulip books and the other is in a private collection in the United States. Another famous tulip book is that one of Judith Leijster and others, in the Frans Hals Museum in Haarlem. Haarlem was to be known for its excellent grounds for bulb growing. The most expensive one in the Tulip book of P. Cos, the Viseroij, was sold for Dfl 3,000 and Dfl 4,200. Fifteen or twenty times a year salary of a schooled craftsman then. For these prices at the height of the Tulipomania you could buy a nice house along the canals of Amsterdam or, at the end, be ruined for the rest of your life as the painter Jan van Goyen experienced. There are two known other drawings, probably from the same album, which are on the art market in Germany1.

1.Ralph R. Haugwitz, Wild red and yellow orchid, 312 x 194 mm and 312 x 196 mm. Both drawings have the initial R in the lower right corner like the present watercolour, and the numbering in the upper right.